“Fine! So stop complaining about your prostate and get on with life!”

“Don’t Teach Me – I’m Perfect!” is a new Jewish comedy, from the hilarious trio of Lena Fiszman, Allen Brostek and Jack Felman, which has played to sell out audiences in both Melbourne and Sydney.

“Not only hilarious, but clever and very perceptive.”

The play deals with the often annoying and frustrating antics of Allen’s ageing parents – Mania & Velvel Pszeszikowski. Try as he might, all his efforts to please and care for them end in failure. As Allen says: “What ever I do for you it’s not good enough! I just can’t win!”.

The play explores the earlier experiences of the parents and the impact on their behaviour in the later years. The success of the show lies in the ability of most of the audience to identify with the universal problems confronting children and their ageing parents: money, health, children and gay issues, to name but a few.

Written by Melbourne comedian and GP, Dr. Jack Felman, the play focuses on the conflict between Jewish immigrants and their children who often struggle to meet their parents demanding expectations.

Dr. Felman, the son of Holocaust survivors, says that the play is based on real-life experiences. "I don't tell any lies or make up anything. Everything is taken from my own experiences, my wife's, the cast's and those of my friends and patients."

"I want people to look at issues that they have or have had with their parents and to be able to laugh at them instead of crying or getting angry. As a doctor, I try to use laughter as a form of therapy. Laughter is the best medicine."

“So much depth and yet so much humanity expressed at the same time.”

Check out the video trailer
of the show at YouTube

“Family comedy will have you in tears” 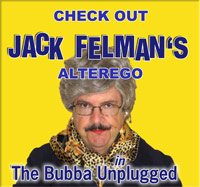